If you have started putting video on your website (you HAVE started putting video on your site haven’t you?), you may have noticed that unless you’re simply embedding YouTube videos, they take a long time to load.  For example, you put a video on your site using any of a number of players, and publish the page.  Someone comes along and clicks the big triangle “Play” button and what happens?  The “loading” icon starts to spin…and spin…and spin.  10, 20 or 30 uncomfortable and impatient seconds go by and still the spinning thingy.  Finally, the video starts to play.

“Geez,” you think.  “Why is it taking so long to start playing?  They don’t take that long on YouTube.”  That is a really fabulous question, and one I have been asking for months.  Finally I asked it in front of the right guy, whose name is Dan Morris.  He said that most video encoders put code together in such a way as to make a video completely load (remember the spinning circle?) before it starts playing.  He said that there was a way to change that code so that the video could start playing before it has completely loaded, like they do on YouTube.  The problem was that we were at the Niche Affiliate Marketing System (NAMS) conference in Atlanta and Dan did not remember exactly how to do it off-hand.

So when we got back from the conference I asked Dan about it and he referred me to Darren Crawford, who gave me the answer I’d been seeking for months.  Get ready to bookmark this.  Ready?  It’s called HandBrake.  Just download this program (http://handbrake.fr), load up your video file and re-encode it to optimize for the web.  Boom!  You’re done.  HandBrake gives you a different file that now will start playing MUCH faster on your page when someone clicks it. 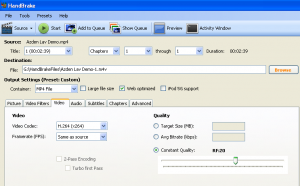 ake on one of the videos on my site that was only 2 minutes 39 seconds long (though it was hi-def).  The first one used my player (JW Player) to play a video I uploaded to my Amazon S3 site.  It took over a minute to load before it would start playing!

So I opened HandBrake (see pic on left).

In the Source drop-down menu I selected my current video file (which was an mp4).  Then I chose a destination folder, put a check mark in the Web Optimized box, and clicked the Start button.  See pic on the right.

HandBrake rendered a new video file (with a .m4v extension) in my destination folder.  I then uploaded the new version to S3, and inserted a second player just below the first one, but this time loading the new file.  This one took 3 seconds to start playing!

So… THAT’S pretty good! 3 seconds instead of over a full minute?  That’s like a gagillion times faster (or if you’re into math, 20 times faster or 2,000 percent faster, etc.).  Woo hoo! Finally!  Check out the result on this page: http://www.homebrewaudio.com/video-test.  The top video is the slow one ( the NOT HandBraked one).  The one below it is the one processed by HandBrake.

So you might be wondering why you shouldn’t just use YouTube for all your videos.  Well some people can do that.  But if you have any paid content that involves videos, such as a video tutorial course, you won’t want these on YouTube.  Plus there are lots of times that I do videos for, oh I don’t know, demonstration purposes like this article, and it wouldn’t make sense to use YouTube for that.

And then there are the videos that you just don’t want everybody in the universe to see.  Yes, you could make them “private” videos on YT.  But that brings me to the final reason why you may not want all your videos on YouTube – the fact that you don’t control them.  Don’t get me wrong.  I definitely put lots of videos on YouTube to drive traffic to my site.  But if 100% of your videos exist only on YouTube, then you’re at the mercy of the folks at Google/YouTube.  All it takes for them to ban your YouTube site is a couple of complaints.  Why risk that?  So at the very least you should have you videos backed up on your computer, which will NEVER crash (shyaa!).  But I also recommend storing them on Amazon S3, where they will be ready to play whenever you call on them, which you can do from any internet connection since it’s a cloud thing.

OK, enough of reasons why you want to host at least some of your own videos.  The point of all this was to show you a really cool, free, and easy way to make your videos start playing much faster on your site.  That way is HandBrake.

Good luck.  Now go make some videos and put them on your site!