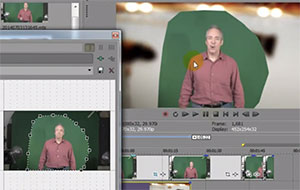 I’ve done a fair amount of green screen video over the past could of years. It’s cool because it allows you to remove the green parts using software (using an effect called chroma key), and use anything you want as a background – either video or still image. You can do the same thing with blue screen (though that’s more common with film than with digital video). Do you remember the scene in Wayne’s World when they get a blue screen and put various locations behind them? Wayne explains that a new thing called “chroma key” allows them to travel anywhere in time and space.” They put up cool location backgrounds like New York, Hawaii and Texas, with Wayne and Garth playing along and acting like they are really there. Though when one of those background locations Delaware, Wayne just says, “Umm, hi. I’m in —Delaware.” It’s funny. Meh, I guess you had to be there:). Anyway….

One problem many folks have when doing green screen video is having too small a screen. I had this issue, and thought the only way I could deal with it was to zoom in far enough that the edges of the green screen (and the stuff behind it) were not visible in frame. But this limits you to close-up shots. When I tried to get further away, the edges of the screen and all the stuff behind it became visible.

But there is a way – a pretty easy way – to have a small green screen (even MUCH smaller than mine), and still have shots that are further back. It’s called using a “garbage matte.” Garbage matting is really just another way to say “masking out everything beyond a certain distance from the subject.” Yeah, it’s quicker just to say “garbage matte,” isn’t it?

Anyway, most video editing software can do this. All you need the program to be able to do is:

If you don’t use image software, that’s OK. The video below will explain all this stuff and how cool it is.

Basically, this is kind of obvious to people who do video editing all the time. But for those of us who don’t, the lack of this knowledge can be frustrating and lead to poor video. And we don’t want that! This site is all about making better video! Hopefully this video will be a great help to you.